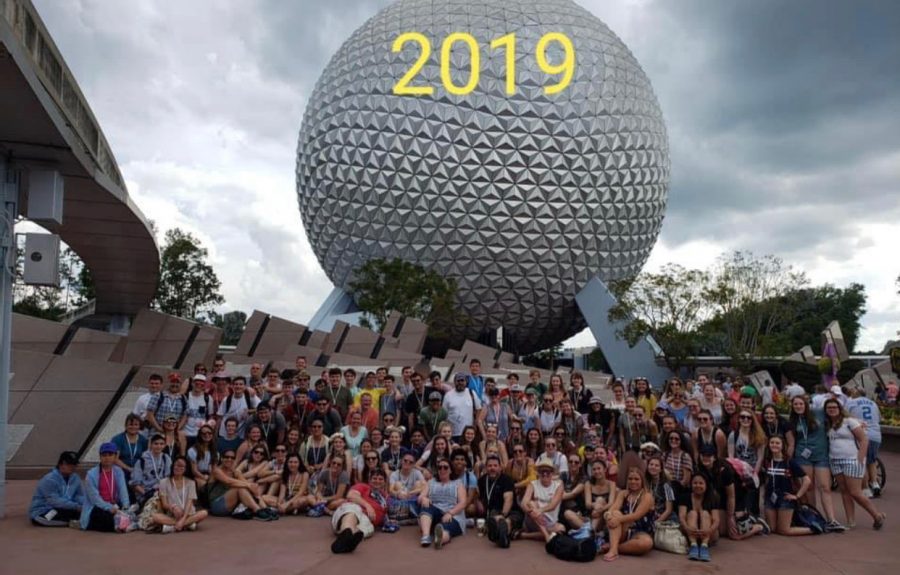 The Point Pleasant Boro Competition Band and Color guard went on their quadrennial trip to Walt Disney World and Universal Studios in Orlando, Florida on April 3. Over the course of four days, the band visited all of the Disney parks including Animal Kingdom, Hollywood Studios, Magic Kingdom, Disney Springs, and Epcot while also spending a day at Universal Studios. Every day the students were busy whether they were performing, talking to real Disney performers behind the scenes, going on rides, eating fantastic food, or exploring everything else that the parks had to offer.

After spending the night flying to Orlando and checking in at the hotel, the band started their first day off by spending a couple of hours at Animal Kingdom where they got the opportunity to see screeching monkeys, a live show of the Lion King, and got to scream going down the drop of the Mount Everest ride. Following lunch, the band went to Disney’s Coronado Springs Resort where they attended the “You’re Instrumental” workshop. At the workshop the band got to meet and work with an actual Disney musician, Julian Bond, to see how Disney puts the magic in every performance and soundtrack produced. The band was then able to sight read multiple fun pieces of Disney music over the two and a half hour workshop. After the experience, senior trombone player Erin Ward stated, “the workshop was really interesting and I was shocked at how much I enjoyed it.” After the workshop the band joined with the color guard and spent the rest of the night exploring Hollywood Studios. After a couple of hours of fun, the color guard went to their own “Disney Auxileration” workshop.  There they were instructed by Lindsey Smith who has worked for Disney for 11 years performing in the Beauty and The Beast show and was also a rockette in New York City for five years. At the workshop, the color guard learned how to dance with ribbons, other new techniques, and were also able to act out routines for various Disney original songs.

On the second day of the trip, the band and color guard visited Disney Springs to not only shop in dazzling stores but to also see the PPBHS jazz band perform three of their songs selected for their jazz concert in May. According to the Guest Talent Coordinator at the Disney performing Arts Facility the jazz performance was, “amazing and definitely made a difference to the vacations of the people listening in the crowd.”  Following the jazz performance the performers got to change out of their jazz attire and go straight to Magic Kingdom where they and the rest of the band and color guard got to go on rides, take fun pictures, and of course got to march down Main Street in front of hundreds of people. The band played “Africa” by Toto, selections from Disney’s “Fantasmic,” and “Hey Mickey” as they paraded in Magic Kingdom. During the parade, the band was lead by the fabulous color guard who were dancing, tossing flags, and spinning rifles to the beat of the music in their sparkling red costumes. After this outstanding and once in a lifetime experience the band got to go on even more rides, eat incredible food, and see the magical fireworks show “Happily Ever After.”

With all of their performances out of the way, the band and color guard could relax and spend their remaining days in Orlando by going to Universal Studios and Epcot. Overall the trip was a huge success and was such a magical experience that the students will remember forever!