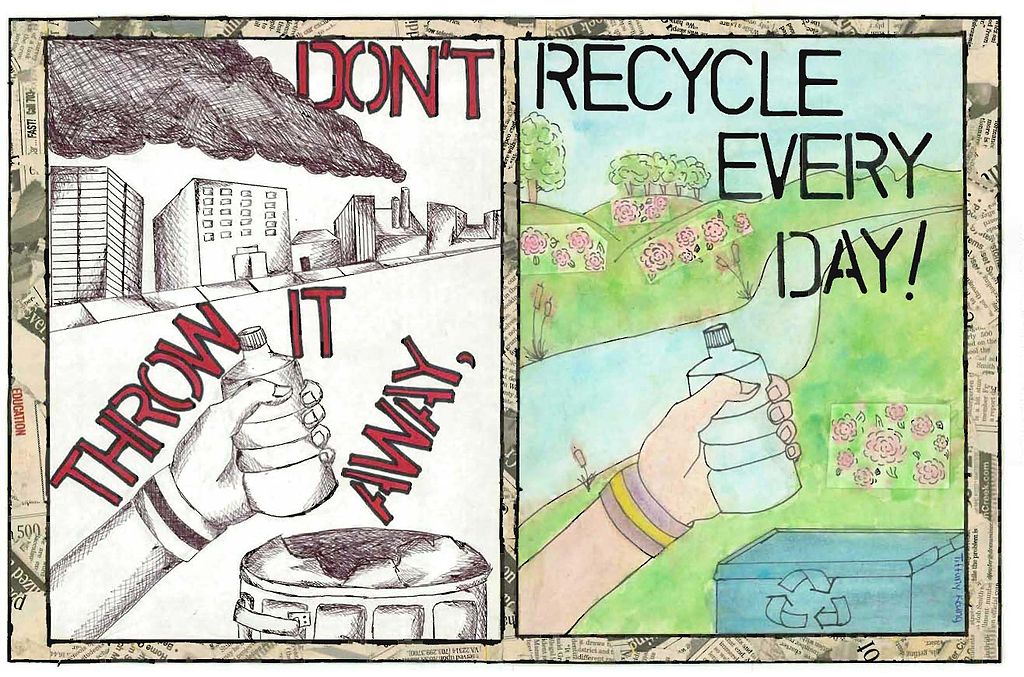 Benjamin B. and Carrinna M.

The fate of planet Earth rests on our shoulders. As we face the devastating effects of climate change–floods, droughts, famine, and sea level rise– it’s vital that we do everything in our power to change the course we’re on. We need to take care of the environment, not just for our own benefit, but for the benefit of future generations and all life on Earth.

At Point Pleasant Boro High School, it seems that many students are unaware of their impact on the environment. Do you know how much garbage you produce in one day? In one week? Do you know how many plastic bottles or containers you’ve thrown away? Most likely, the answer is no, but it’s never too late to start paying attention to what you use and how you dispose of it.

There are so many little things that people just do not know. Even those who are trying to do the right thing, sometimes don’t because they’re misinformed”

Recycling is one of the easiest and most effective ways to help sustain Earth’s resources. By simply separating trash from plastic, glass, aluminum and paper, you can save hundreds of pounds of recyclable materials from ending up in landfills. Take it a step further by using reusable containers and bottles, composting food waste, and making your own cleaning supplies. Further investments, like buying an electric car, installing solar panels, and building a greenhouse/garden make an even more significant difference, and reduce your carbon footprint. With just a few mindful actions, you can conserve resources, reduce waste, and become more environmentally friendly in your everyday life.

Throughout our school there are multiple recycling bins, but students often neglect to separate their trash from recyclables. Little do they know that on top of the environmental consequences, Ocean County fines individual schools for improperly separating garbage and recycling. Since the school year began, we’ve been fined $300-$400 per month for improperly recycling. However, we’re not alone. The FDA reported that around 50% of trash they collect could be recycled. This estimate is astounding! Why do so many recyclable goods end up in landfills? The biggest factor is convenience and knowledge.

In an interview with Mr. Hopkins, the Director of Facilities at Point Pleasant Borough school district stated that  “[the district has] paid fines anywhere from $300-$400 dollars per month on a couple of different occasions. This was all because of not recycling properly. I had a waste management company come to the school to train the custodial and maintenance staff on recycling in the hopes that everyone would learn something from the training. I sure did! Who ever knew that a plastic bag was not recycling, it’s plastic right? However, plastic bags are not recyclable. Another common item that often gets improperly sorted are pizza boxes, which are not recyclable. There are so many little things that people just do not know. Even those who are trying to do the right thing, sometimes don’t because they’re misinformed.”

Sophia Bradach, a senior and head of the Gardening Club, has been working to encourage recycling at our school. She has been personally sorting through the recycling and garbage bins to make sure everything has been properly sorted. “It’s crazy how much plastic gets thrown away,” she said, removing countless water bottles and placing them in the correct bins.

The effort to be more environmentally conscious shouldn’t fall on the shoulders of one or two people. We need to collectively become more aware of the impact we have on our world. By simply tossing your water bottle in one of the dozens of blue containers around the school, you’re giving that plastic a second chance and preventing it from ending up in a garbage dump, or in the ocean.

One Response to “Reduce, Reuse, Recycle!”