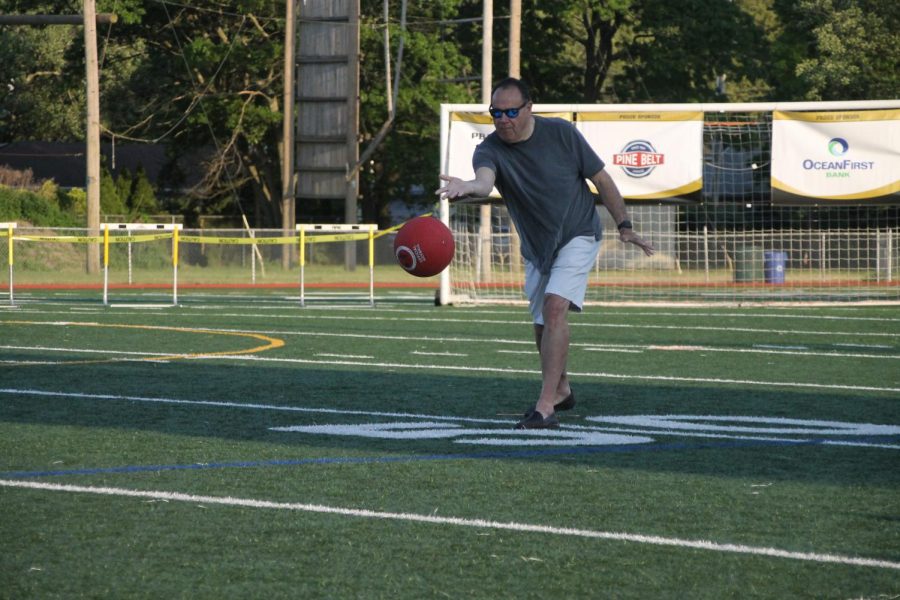 Superintendent of Schools, Mr. Smith, throws the first pitch of the game

In tradition to the seniors graduating, there is always a Senior vs. Staff event as a senior privilege. Usually a basketball scrimmage would be played, but due to COVID precautions, the event wouldn’t be safe being held indoors and without masks. As an outcome to this setback, the idea of kickball was arranged. As this safer alternative to a basketball game was socially distanced and held outside, kickball was the way to go!

Formed by the Sport Management Class and Project Graduation, this event was held on the Al Saner Field at 7:00 on May 20, 2021, with a total of 20 staff members and 45 seniors signed up for the event. The total to play in the kickball game and to receive the game shirt was only $5 dollars. Ocean First Bank and Pine Belt Cars were the two title sponsors for the kickball event, with additional sponsors including the PBA #158 and Associated Financial Planners. The event was also supported by the Point Boro First Aid and Point Pleasant Fire Department.

Thanks to the NFHS Network, the game was broadcasted internationally for all to watch. Since some were unable to attend in person, live streaming was held for all the virtual watchers. The tournament had an announcing team calling the game over the loudspeaker. Between innings there was music and promotional events held throughout. People of all ages, not just students, came to watch in person on the bleachers, there was even VIP and sponsor signage throughout the stadium.

With all the school spirit, even Zanther the Panther showed up running around the stadium hyping up the audience. The goal of the Sport Management Class was to uphold their motto of “putting butts in seats” and that is what happened. Crowds of students and parents all came to support.

In honor of the seniors graduating and leaving the school, the kickball event was the perfect event to give seniors a little bit of normalcy since the start of COVID and all the differences this year. Ending the tournament, and their PPBHS careers on a high note, the seniors ended up claiming victory!