An American Hero: The Story of Jeffrey Wells 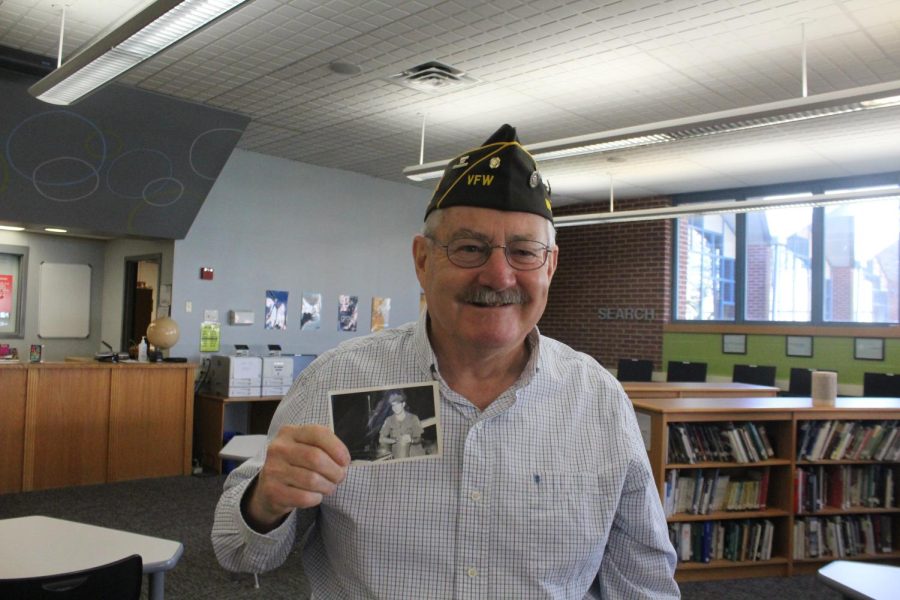 Veterans Day is a day of remembrance that pays tribute to all living veterans who have honorably served their country during war or peacetime. It is observed every November 11, because that was the day that World War I ended, also known as Armistice Day.

On November 18, Vietnam Veteran Jeffrey Wells visited Point Boro High School, and we interviewed him about his experience before, during, and after his service in the Vietnam War.

Born at the end of World War II, Mr. Wells grew up in Lavallette and graduated from Point Beach High School in 1968. Uninterested in pursuing college, Wells was inspired by his grandfather and older brother, who served in the Navy and Air Force. The following year, he joined the Navy and traveled to Memphis, Tennessee. During his time in Memphis, Wells learned how to be a competent aircraft mechanic. This involved learning about electronics, hydraulics, and jet engines.

In 1969, Wells completed his courses in aircraft mechanics and was presented with a difficult choice: Stay in America and continue to manufacture and repair aircrafts or get deployed and fight in Vietnam. Wells chose to go fight, and was deployed the following spring.

Wells arrived in Vietnam in April 1970 and was placed in the Seawolves squadron. He continued to use his knowledge of aviation by repairing and maintaining aircraft carriers. He also rescued people from plane crashes and protected those transporting supplies down the rivers.

During his time in Vietnam, Wells struggled to find his purpose there, but he quickly realized why the war-torn country needed America to get involved: “You’re wondering to yourself, ‘What the heck am I doing here?’ But then you realize certain things were being done to people that should never be done, and you want to go fight for them and be a part of it.”

Throughout his time in Vietnam, Wells maintained correspondence with his parents. They sent him numerous letters and care packages. Wells also befriended many other soldiers in his squadron, but has since lost contact with most of them. One year after being deployed, Wells returned back to America, but his reception was not at all what he expected.

When Mr. Wells returned home in April of 1971, he was received very poorly. Most of those on the home front opposed the idea of the USA getting involved in the Vietnam War. “We were spat on and called baby killers. When you come home from war, you’d think everybody would celebrate you. But that’s not what happened.”

Fortunately, Wells recovered from his unpopularity and moved back to Ocean County. He got married and started a family. He became supervisor of the New Jersey American Water Company, and was a part-time police officer with the Bay Head Police Department for 37 years.

Today, Mr. Wells is a grandfather and regularly attends local VFW meetings (Veterans of Foreign Wars). He encouraged us to always pursue what we wanted to do. Mr. Wells advised that, “no matter how much money you make doing something you hate, it will never be as good as doing something you love.”

Mr. Wells is a selfless person who puts his life at risk to benefit many others. He is a hero and an inspiration to anyone that hears his story. When you think of veterans and people who fearlessly protect our country, think of him. Jeffrey Wells, thank you for your service.