The Oscars and the Slap 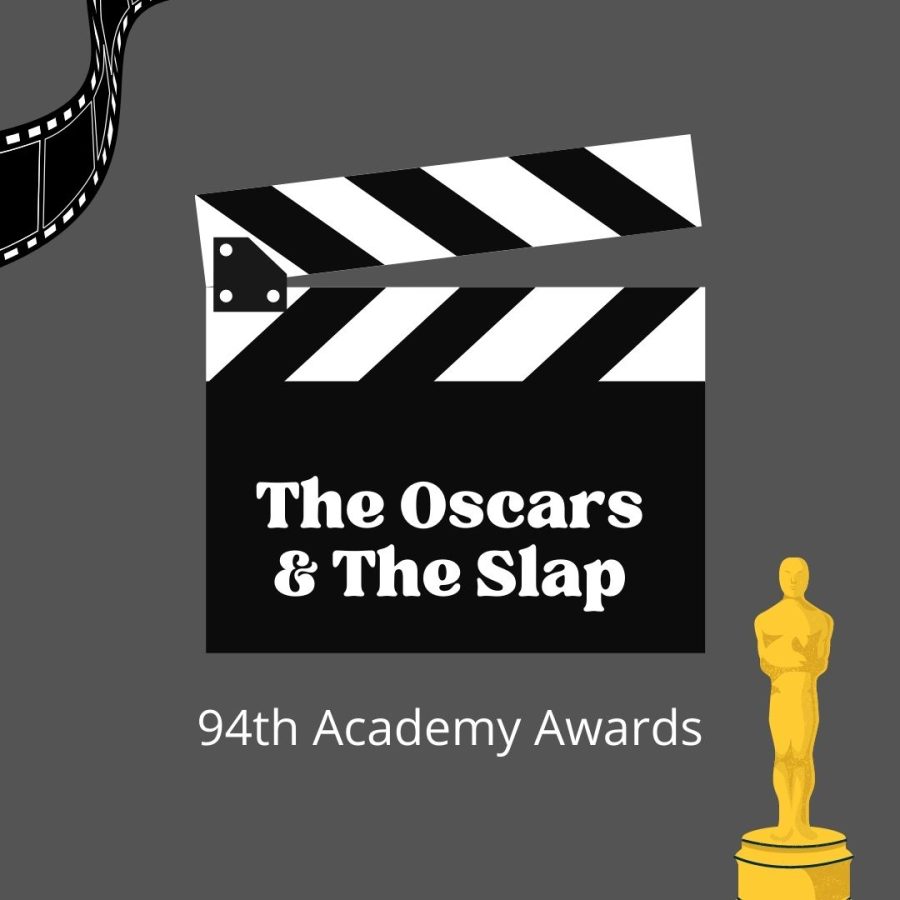 Each year since 1929, the entertainment industry and film fans from all over the world come together to watch the Academy Awards. The Academy Awards, also known as the Oscars, were last month on March 27, 2022. These awards are for artistic and technical excellence, and are looked at as the most outstanding and significant awards in all of the entertainment industry. They are often regarded as the “highest honors in filmmaking”(oscars.org).

There are many awards to win, with the most anticipated ones being: actor in a leading role, actor in a supporting role, actress in a leading role, and actress in a supporting role. This year’s nominees for best actor in a leading role were Andrew Garfeild for tick, tick…BOOM!, Will Smith for King Richard, Javier Bardem for Being the Ricardos, and Benedict Cumberbatch for Power of the Dog, Denzel Washington for The Tragedy of Macbeth; Will Smith won for playing Richard Williams. This year’s nominees for best actress in a leading role were Olivia Colman for The Lost Daughter, Penélope Cruz for Parallel Mothers, Nicole Kidman for Being the Ricardos, Kristen Stewart in Spencer, and Jessica Chastain in The Eyes of Tammy Faye; Jessica won for her portrayal of Tammy Faye. For actors in a supporting role, the nominees were Troy Kotsur for Coda, Ciarán Hinds for Belfast, Jesse Plemons in Power of the Dog,  Kodi Smit-Mcphee in Power of the Dog, and J.K. Simmons in Being the Ricardos, and Troy won for Coda. Last but not least, the nominees for actress in a supporting role were Adriana DeBose in WestSide Story, Jessie Buckley in The Lost Daughter, Judi Dench for Belfast, Kirsten Dunst in Power of the Dog, Aunjanue Ellis in King Richard, and Adriana won. So many names to represent so much talent, but only one can win; although these awards are subjective, they are still special and symbolic.

If there is one thing to remember from the 2022 Oscars, it would be the slap Will Smith gave Chris Rock after Chris poked fun at Will’s wife, Jada Pinkett Smith’s bald head. As Chris Rock was presenting for the best documentary he said “Jada I love you, G.I. Jane 2, can’t wait to see it.” It seemed all was fine until the camera turned back to Chris presenting when Will got up and started walking towards him; Chris said “Uh oh, Richard,” while laughing, Will smacked Chris right across the face, turned around and proudly walked back to his seat. Nothing like this has ever happened in Oscars history, so people thought it was all planned, but it was obvious Chris didn’t know what to do or say. Will then proceeded to yell profanities at Chris showing it wasn’t staged.

As the infamous slap drew more press and attention to the Oscars, it also took away from the other memorable and iconic moments. Presenting the award to the actor in a leading role were Oscar nominees, Uma Thurman and John Travolta, along with Oscar winner, Samuel L. Jackson. Uma and John were recreating the iconic dance scene from Quentin Tarantino’s Pulp Fiction as Samuel announced the winner, Will Smith. Another memorable moment would be Lady Gaga helping Liza Minnelli present the best picture award by whispering, “I got you.”

To which Liza replies, “I know.” Another one would be when Troy Kotsur won for Coda, making him the first deaf man to win an Academy Award for acting. “This is dedicated to the deaf community, the Coda community, and the disabled community,” he signed.

The 94th Academy Awards were definitely a night to remember. Whether you remember the slap, the recreation of the iconic dance scene in Pulp Fiction, Adriana DeBose, who thanked the icon that is Rita Moreno for paving the way, or Lady Gaga helping Liza Minelli as she celebrated her 50th anniversary of Cabaret by presenting an award. As Chris Rock said, “That was the greatest night in the history of television.”