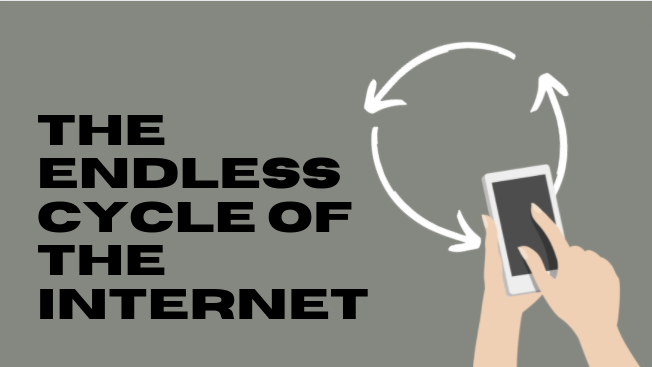 The Endless Cycle of the Internet

The internet – a digital space completely created by you, a feed personally curated to your exact needs and wants. A world beyond our physical being made up of exactly what we want to see, even if we didn’t know we wanted to see it. We look towards the internet for an escape from boredom and stress only to return to the real world feeling more disconnected and alone than ever. The digital era that we live in has taken control of our lives. Whether you consider yourself addicted to your phone or completely against technology, there’s no doubt that the internet has completely shaped the way we think and behave. This is the endless cycle of the internet, and the way young people are affected by it is devastating.

Those born between the years 2000-2015 have been the most heavily influenced by this virtual era, growing up in a time of little information about the effects of the online world and likely very little supervision. Our mind has been trained to take in and compare information at a speed far faster than it’s supposed to. The minds of children and teenagers are especially not made to process these intense posts and information that they are exposed to. Young people are taught to compare themselves to every picture-perfect post they see online. This has caused them to feel like they need to act older at a younger age in order to mirror what they see online. But why does the internet make kids feel like this, and why hasn’t there been a better effort to stop it?

For years, social media companies have been using perfectly altered algorithms to reel people in and encourage them to keep scrolling. This mindless use of social media has been able to entice everyone into these sites. Due to their small attention spans, these companies have one target demographic in mind – teenagers. Their minds are at an age where they can be easily manipulated and can become addicted to anything they try. Between the stress of school, personal life, and growing up, mindlessly scrolling is the perfect remedy for kids to escape their everyday life. Although it sounds nice in theory, the things they see are actually deeply damaging them psychologically. This appearance of fitting in is something that the internet has been able to give to teenagers to reel them in further. But these false appearances of social groups have been proven to make teens feel antisocial and alone. This creates an endless loop of a teenager feeling lonely or stressed and looking towards social media, finding an online group, and then in return feeling more stressed in real life as a result. This is a cruel cycle that social media companies purposefully use to mess with the mind of kids.

Science says that kids and teenagers are heavily impacted by social media – but what do teens think? I put out a survey to see how students in Point Pleasant Boro High School think of social media. Out of 112 responses, 95.5% of those asked said that they believe social media is negatively impacting people under 18. I also asked anyone who felt as though their lives have been changed by social media to explain how. Many people – especially girls – said that have constantly compared themselves to models and older people ever since joining the online world. Another common response was that many teens felt they were exposed to inappropriate content too early. Clearly, kids are aware of the damage being done to their brain from the internet, yet are still inclined to use it anyway.

I interviewed Mrs. Bolger, the school’s sociology teacher, about her opinions on teens and social media to get the perspective of an educator. When asked how she’s seen kids change over the years since the introduction of social media, she stated, “More often now, students are more inclined to pull out their phones and check social media posts than interact with one another.”

This antisocial behavior is a direct result of the addiction and attachment to the internet. So, how do we fix this? By limiting the intake of social media and the use of screens, we can hope to eliminate those feelings of envy for those we see online. We can only break this cycle of the internet by working together and breaking bad habits.

It’s clear that the social world has changed dramatically since the introduction of the internet. The tactics and mind games that social media companies use to target young people is something that needs to be stopped right away. Kids everywhere are having their childhoods stripped away from them due to the encouragement by older influencers to act like them. Teenagers are having their mental health broken down even further by these psychological tricks that companies use on them to get them addicted. By working together and getting kids to feel more in control of their online life, we have a better chance of breaking the cycle and creating a healthier, happier, and safer digital space for everyone.